After sharp rebound in FY21, where rebased GDP growth clocked in at 5.74%, strong momentum in economic activity continued during FY22. As per the FY22 Economic Survey, GDP growth rate is estimated at 5.97%, led by 7.2% growth in industrial output, 6.2% increase in services sector, & 4.4% rise in agriculture sector. FY23, however, will prove to be a challenging period for economy, and especially for the common man. The prevailing commodity super-cycle, exacerbated by the Russia-Ukraine conflict, is likely to culminate into a scenario of high inflation and low growth in the country. While the recently announced FY23 budget has tried to broaden the tax base, the overwhelming onus to shoulder the GoP expenditures has again fallen on the already documented and taxed segments of the economy. Majority of the targets in FY23 budget seem too ambitious, and the government will find it difficult to achieve them under the prevailing global and domestic economic scenario.

GDP growth: Although the government growth target of 5% for FY23 is lower compared to the outgoing year, we feel that it is very ambitious keeping in view both local and international macro-economic conditions. World Bank has repeatedly lowered its growth forecast for this calendar year and is highlighting risks of stagflation, while local conditions will also limit growth, in our opinion. Currency devaluation, decade-high level of Policy Rates, record international commodity prices, rising inflation, elevated current account deficit (CAD) and higher outflows on the financial account, will compress demand. We project GDP growth likely to range around 2.5%-3.5% for FY23.

Inflation and Interest Rates: As in the rest of the world, due to ongoing commodity super cycle, there is an across the board surge in prices (food prices, fuel prices, power prices and other consumer discretionary items). Consequently, inflation as measured by CPI shot up considerably during FY22 and clocked in at around 12.1%. For the next year, we anticipate the inflation to further increase despite high base on account of expected upward adjustment in power & gas utility prices, and further increase in retail fuel prices, as the government has committed steep PDL and sales tax target with IMF. Similarly, there is sharp adjustment expected in power tariffs and gas tariffs, which will keep inflation trajectory on the higher side for FY23. For the year, we expect inflation to range around 15%-16%, as against GoP target of 11.5%. Considering the inflation trajectory, further hike in interest rates is likely, though its quantum (100-200bps) may be limited by the cost push nature of inflation and slowdown in the economy. 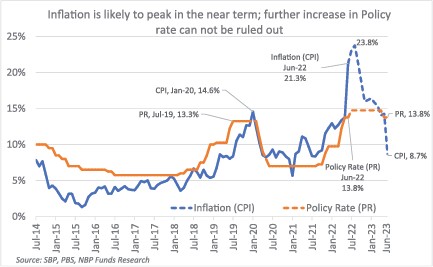 Current Account: Due to unfavorable trade terms (as import of goods and services are around twice the exports) amidst some overheating of the economy, coupled with the unprecedented commodity super cycle, the external vulnerabilities of the economy have again come to the fore. Current account deficit (CAD) has risen sharply to USD 15.2 billion during 11MFY22, and is expected to close in the vicinity of USD 17.0 billion for FY22. For the upcoming fiscal year, FY23, we expect some moderation in CAD, since there were few one-offs during the outgoing year, as vaccines, TERF-related machinery imports, and some defense related equipment ballooned imports during the year. Furthermore, with steep surge in retail fuel prices, we expect demand contraction of the same, that will contain fuel import bill as well. We estimate the CAD to range around USD 10-12 billion for the year, keeping its pressure on the FX reserves.

Fiscal Deficit: For FY22, the government has estimated the fiscal deficit to stand at 7.1%. This does not include the energy circular debt. Encouragingly, FBR’s revenue collection stood at PKR 6.12 trillion during the year as against PKR 4.74 trillion collection in FY21, showing a hefty 29% growth on a year-on-year basis. In FY23 budget, the government envisages reduction in fiscal deficit to 4.9% of GDP through a sharp 21% growth in FBR taxes from PKR 6.12 trillion estimated collection in FY22 to PKR 7.4 trillion. This tax collection target looks very ambitious, keeping in view moderating economic growth, and challenges in implementation of new tax measures (especially on Real Estate). We expect fiscal deficit for the coming year to clock in around 5.5%-6%. 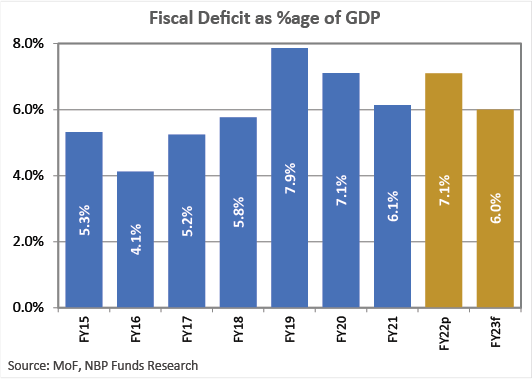 IMF program and economic reforms are the key: The 7th & 8th IMF reviews are expected to be combined and Pakistan could receive USD 1.9 billion upon program resumption. Besides the financial relief, IMF program would ameliorate the credibility of Pakistan in the eyes of global financial community, paving the way for fetching flows from multilateral agencies and also facilitate access to international capital markets. Showing its commitment to meet the terms of the program, the government raised retail fuel prices massively (motor gasoline and diesel prices have been jacked up by PKR 99 and PKR132 per liter, respectively), and we expect further increment in the prices due to gradual increase in petroleum levy and imposition of sales tax. The power and gas tariffs are also likely to be raised in July, paving way for resumption of the IMF program. Followed by the IMF program, the focus of the government must shift to long needed structural reforms that include a) expanding the narrow tax base by taxing all sources of income including Agriculture & Real estate at same rate, b) privatization of State Owned Enterprises, c) rationalization of current expenditures in favor of development expenditures, d) improving governance standards and competence at all government levels, e) fiscal consolidation by raising utilities tariff and reducing circular debt, and f) implementation of policies to promote exports and curtail imports especially non-essentials, under a flexible exchange rate regime.

What lies ahead for the equity market: In terms of market outlook, we acknowledge heightened economic risks arising from rising inflation, slowing growth, and weakening external account. PKR devaluation, steep surge in fuel and utility rates coupled with record high commodity prices are likely to result in significant inflationary pressure, which means tight monetary setting for an extended period of time. Looking at the fundamentals, we feel that current stock market valuations compensate for the risks highlighted. Corporate profitability growth is expected to remain strong @ 15.7% in FY22, despite imposition of 10% super tax. For FY23, we expect the growth to moderate to 9.1%. Due to lackluster market performance, Price-to-Earnings Ratio (P/E) has come down to a multi-year low of around 4.4 times (earnings yield of around 23%). The Market-Cap to GDP ratio, has also touched historic low levels, suggesting very small proportion of national disposable income is being channeled towards equity investments. Any tangible improvement on economic front will trigger a strong rally, whereas the resumption of IMF program also remains a key trigger. Side by side, the prospects of roll-over from friendly countries (China has already rolled over USD 2.3 billion) and additional commitment from them also appears likely under an IMF program. Investors with medium to long-term horizon are advised to invest in the stock market via our NBP Stock Funds to capture attractive valuations, whereas risk averse investors can benefit from high interest rate environment via our NBP Savings Funds. 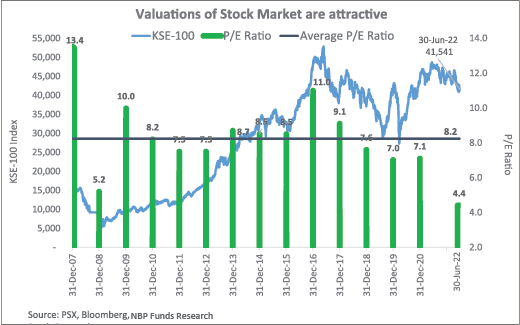