Pakistan’s economy staged a V-shaped recovery as reflected by an estimated 3.94% GDP growth for the outgoing fiscal year despite lingering effects of stabilization and the full-blown impact of the Covid-19 pandemic. Frequently released economic data such as cement dispatches, automobile sales volume, and sales of retail fuel also validate strong rebound in economic activity. Overall output of the Large Scale Manufacturing Industry (LSMI) increased by 12.84% for July-April 2020-21 compared to July-April 2019-20. (see Chart-1). Similarly, SBP-IBA Business Confidence Survey that gauges the perceptions of company managers about current and expected business conditions shows overall business confidence remained in the positive zone for the 5th consecutive wave, though the Index decreased from 60 in February 2021 to 58 in April 2021 (see Chart-2).

The federal budget FY22 is positive for the stock market as attempts have been made to offer incentives to the business and relief for common man. Following are key measures for the stock market and industries: reduction in Capital Gains Tax (CGT) on securities from 15% to 12.5%; Turnover Tax rate has been lowered to 1.25% from 1.50%; Custom Duties, Additional Custom Duties, and Regulatory Duties on several imported raw materials have been brought down; Federal Excise Duties and Sales Tax on some products have also been lowered/abolished; and renewed focus on economic growth with GDP growth target of 4.8%, amid significantly higher federal and provincial allocation for development spending.

For FY2022, the government has envisaged GDP growth rate of 4.8%. The industrial sector is likely to remain buoyant due to improvement in export volumes in line with the renewed buoyancy in world trade. The massive TERF facility has helped augment the industrial capacities in the country that will support growth going forward. We foresee growth momentum in construction sector to gather pace on the back of higher budgetary allocation for development spending. The growth rate of Agriculture sector is targeted at 3.4%, due to low base effect and emphasis on the use of better-quality seed, and modern technologies. The Service sector is envisaged to have growth rate of 4.7%.

External account has improved significantly mainly due to a hefty 29% year-on-year growth in workers’ remittances to USD 26.7 billion during 11MFY21. We expect Current Account Deficit (CAD) to come in at USD 300 million (0.1% of the GDP) for FY2021. The government has announced the availability of $1.5 billion Saudi oil facility per annum on deferred payments. To augment FX reserves, the recently introduced Roshan Digital Account (RDA) has also got success as inflows have crossed the USD 1.5 billion mark. Earlier, the country has borrowed USD 2.5 billion by selling Eurobonds and has also received the IMF tranche of around USD 500 million under the Extended Fund Facility. Foreign exchange reserves of SBP improved to USD 16.1 billion from USD 11.3 billion at CY19 end. With pick-up in economic activity and a quantum jump in commodity prices, CAD is expected to widen to USD 5 billion (1.5% of GDP) in FY22. The improving external account and market determined exchange rate regime adopted in 2019 have lent stability to the rupee that is trading near its fundamental value as determined by Real Effective Exchange Rate (REER) reading of 102.3. We expect a measured 7-8% devaluation in FY22. Key risks to our BoP projections stems from: persistent rise in global commodity prices; decline in workers’ remittances after a gradual lifting of travel restrictions; and volumetric increase in imported industrial raw materials with higher trajectory in economic growth.

Average CPI inflation clocked-in at 8.9% in FY21. The government expects headline CPI inflation of around 6-7% for FY2022, while our estimates suggest inflation to remain at around 8.1%. Key risks to our inflation expectations stem from any sharp increase in global oil and food commodities prices, steep increase in Petroleum Development Levy (PDL) by the government to achieve revenue targets, higher than expected rise in utility tariffs, and lower than expected production of food crops. Despite elevated inflation readings, the SBP has hinted at continuation of accommodative monetary policy regime in the near-term with a gradual and measured hike in the Policy Rate, going forward. We anticipate a modest 1-1.5% hike in the Policy Rate during FY22.

Fiscal deficit remained a major challenge for the government during FY2021 amid elevated debt servicing cost & cash bleeding by the loss-making SOEs. Encouragingly, despite Covid-19, FBR’s revenue collection stood at PKR 4.7 trillion in FY21 against PKR 4.0 trillion collection over the corresponding period last year, showing a hefty 18% growth on a year-on-year basis. Resultantly, the budget deficit is expected to clock-in at 6.9% during FY21. The government is targeting reduction in fiscal deficit to 6.3% of GDP in FY2022 that entails a sharp 24% growth in FBR taxes from PKR 4.7 trillion collection in FY21 to PKR 5.83 trillion in FY22. This tax collection target looks ambitious, keeping in view 13% budgeted nominal GDP growth and absence of any significant new taxation measures in the budget. We expect fiscal deficit to remain elevated at 6.9% in FY22.

Stock Market: After a robust pre-budget rally, the stock market was seen trading in a narrow range during the last couple of weeks, as investors seemed weighing the incentives offered and new taxation measures taken in the federal budget FY22. However, the market (KSE-100 index) has delivered a robust 38% return during FY21. After a staggering 74% rise from its March-2020 bottom, we hear many investors saying that the stock market has risen too far too fast and thus it has run its course. In our view, the current market levels are still attractive for investors with medium to long term investment horizon given cheap valuations as captured in the P/E multiples of 6.5x; improved economic outlook; promising corporate prospects; and supportive monetary conditions.

From the valuation standpoint, the market is trading at an attractive forward Price-to-Earnings (P/E) multiple of 6.5x, versus 10-year average of 8.4x. The Earnings Yield of 15.4% offered by the market also looks appealing compared with the 10-year PIB Yield of 10% (see Chart-3). The stock market also offers a healthy dividend yield of 5.3%. Helped by robust demand and strong profit margins, we expect corporate earnings to grow at double-digit rate over the next two to three years.

The Bottom Line: The stock market is well poised to deliver strong returns in FY22, and beyond driven by: (i) double digit per annum expected growth in corporate earnings over the next two to three years; (ii) a healthy 5.3% dividend yield; and (iii) some P/E re-rating. Therefore, we advise investors with medium to long-term investment horizon to build positions in equities through our NBP stock funds. 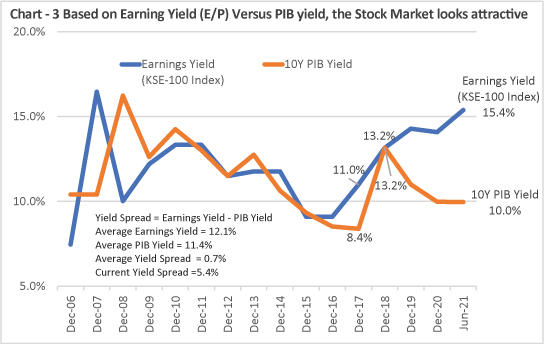 Disclaimer: This publication is for informational purpose only and nothing herein should be construed as a solicitation, recommendation or an offer to buy or sell the fund. All investments in mutual funds and pension funds are subject to market risks. The price of units may go up as well as down. Past Performance is not necessarily indicative of future results. NBP Funds or any of its sales representative cannot guarantee preservation / protection of capital and / or expected returns / profit on investments.